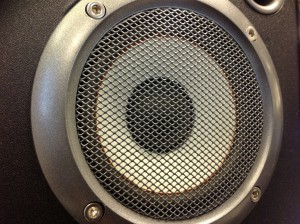 On a frosty Friday, I was observing Helen. Following her directions, I parked in the Lowry Designer Outlet, looking forward to some shopping therapy afterwards to get free parking. Salford Quays pleasantly surprised with its modern but quite interesting and attractive architecture. Media City UK was surrounded by water, bridges, and BBC buildings. Three plain but powerful letters were reminding about the pace of the modern life. There is no better place for a radio class!

Surprisingly, all learners arrived on time – as they really should for their own radio show. The atmosphere was nice and relaxed. There were no standard desks, just chairs along the glass wall, and the mixing boards at the opposite wall. This layout eliminated the barrier between the tutor and students, and really helped to establish the contact.

Another surprising point was level of students’ interaction. As pre-observation form suggested, this group did not know much about radio drama. Yet they were very interested and engaged in the discussion, which was confirmed by students’ body language. Not a single student remained silent during the class. Jones (2008: 2) states: “Students show increased effort in classroom activities when teachers take an interest in students as individuals, get to know them by name, and talk to them not only in the classroom but during other activities in the school as well”.

Tutor definitely knew the subject and was able to present it in an exciting way (UKPSF K1 and K2). At one point through the session I suddenly caught myself listening to the session rather than observing. It was so exciting that I completely forgot about my observation! I had to make an effort to stop listening to a very interesting discussion and get back to the task I actually came for! This fact really impressed me. I believe this is the best confirmation that the students were hooked up (UKPSF A4, A5), as the natural flow of the session managed to snatch attention of a stranger (UKPSF V4) who came for a completely different task!

I noted two aspects which could be further improved in this session. First of all, in my opinion, it would make sense to state aims and objectives before the class started (UKPSF A1). They were included in the lecture notes, but it is always worth reminding. As Dimitrova-Gjuzeleva (2011: 14) states “Lessons plans must have clearly stated aims and objectives, in order to ensure that lessons focus on learning rather than teaching the coursebook”. They could also be used as a formal start of the session. Second, there was some background noise coming from the corridor, probably air conditioning. It was minor issue and did not affect the quality of the session, but sometimes it made tutor to speak louder.

Having had rich professional experience, tutor provided excellent real life examples, that were relevant and helped delivery of the material (UKPSF V3). Lengths of radio plays were exactly spot-on: not too long to lose concentration but long enough to hook the listener.

The second impressive thing came up at the end. As part of the course, every student needed to do a project. They had some options but my impression was that all students planned to create news broadcast as they saw radio drama as something boring and old fashioned. Probably this judgement was based on their perception rather than knowledge or experience. However, by the end of the session significant amount of students actually switched over. They said they will do radio drama instead of news! This was indeed a “wow”-ending of the session, and it became obvious that these three hours pushed students’ mind a little bit further and made them think – so the ultimate role of a teacher was successfully achieved!

Dimitrova-Gjuzeleva, Svetlana (2011) Teachers as lifelong learners or the Craft, the Art and the Magic of professional development (Implementing a Pedagogical Portfolio – a Case Study). Foreign language teaching, 27 (3). ISSN 0205-1834.